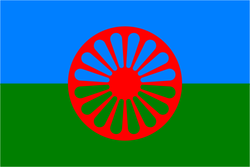 The Roma, are a people without a country.  They are a distinct ethnic minority, whose origins began in the Punjab region of India. Their migration, which is believed to be a forced one, began in the 12th Century, when they traveled through the Persian Gulf, Egypt, Turkey, eventually spreading all over Europe.  Today Most Roma have settled down in a single location. Only about 5% of European Roma are believed to be nomads.

The Roma have been persecuted since they left their native India.  They were slaves to the Persians, outlawed in Europe till the 18th century, deported into the concentration camps of Nazi-Germany and used as human shields during the Balkan wars.  While Roma are Europe’s largest ethnic minority, they remain the least integrated and the most persecuted people of Europe today. The Roma are still suffering discrimination to this day.  They are looked at as dirty good-for-nothing thieves and liars.

The Roma are widely known as Gypsies, but they don’t call themselves Gypsies, because it is a derogatory term.  This becomes clear when considering the phrase “I’ve been gypped.”  It plays into the stereotypes of them being liars, beggars, swindlers and thieves. The term Gypsy came from the false assumptions that the Roma came from Egypt.  The term Rom (plural Roma) means ‘human being’ in the Romani language.  The first step in fighting against the wide-spread stereotypes, and discrimination of the Roma, is to use the word Roma instead of Gypsies.

The messages that the Roma kids get from their environment and the society are, that they don’t have a hope or future, that they’re good for nothing and can’t ever make it.  They’re looked upon as dirty beggars, liars and thieves that will never change. I’ve often heard the Roma say “We’re Gypsies, and we’ll always be”, as an excuse for lack of education and unacceptable behavior.  It’s really sad because it indicates that they’ve given up on themselves.

There is a cycle of hopelessness on the Roma’s lives, and it starts in early childhood.  The Roma children grow up believing all these messages – if nobody speaks the truth into their lives.